Moon Duo are a two-piece psychedelic rock band from San Francisco. They’ve had work their work feature in Grand Theft Auto V. I spoke to lead singer Ripley Johnson ahead of their performance in Letterkenny’s ‘Distorted Perspectives’ festival on 2 May. 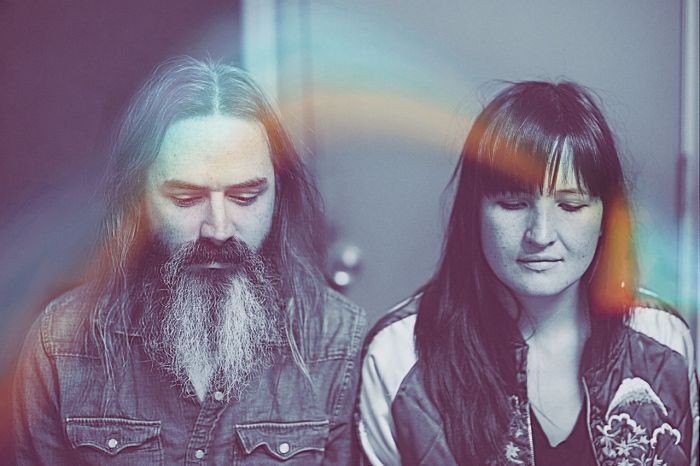 Where are you right now as you write this?

I’m on a farm near Herefordshire, having a cup of tea.

Do you enjoy life on the road?

I do most of the time. Like anything, it has it’s pluses and minuses. It’s great to see new things and meet people. I do miss home a lot. I’m kind of a homebody by nature.

How important do you think small local festivals like Distorted Perspectives are?

I guess you would know more than me. I like to play them, and it’s great to be able to play outside of the usual cities. Hopefully the local community benefits from them. I’ve lived in small towns and I would have loved to have something like Distorted Perspectives near my hometown.

Do you feel like playing such small things is, in a way, going out of your own way to play?

Not at all. We would love to do more but we’re not a pop or traditional act, so we don’t have as many opportunities to play outside of cities.

Moon Duo has been described (by solid sources like wikipedia) as a “side project for Wooden Shjips guitarist Ripley Johnson”.

What were the different aspects you looked to explore as part of Moon Duo that you couldn’t in Wooden Shjips?

The last time I looked at our Wikipedia page, years ago, they had some errors. So I wouldn’t trust that. There were so many things that I wanted to explore outside of the Shjips. When Sanae and I started we had a blank slate, and we have very similar tastes in music, so it was very freeing. Freedom was the big thing. With four guys, it’s more complicated to find a common ground and very hard to move quickly. We wanted a more nimble outfit, both artistically and practically. I’m very impulsive.

Is it hard to juggle two projects? Are you getting more out of either of them?

It’s not that hard because the Shjips guys are busy with other things. It’s difficult to get everyone on the same page, get time off from work, etc… So right now I get a lot more out of Moon Duo. It’s full time really. And I like to work.

You found a degree of mainstream attention with the song Sleepwalker being featured in Grand Theft Auto V. Has that benefitted you? If so, how?

We didn’t see any tangible benefit, other than getting paid. My nephew thought it was really cool.

What makes you want to be a musician?

It’s just a natural way for me to express myself, something I’ve felt since I was young. I just really feel it.

Who of any musician would you like to perform with and why?

I’m a terrible collaborator, a real control freak. That said, maybe someone like Martin Rev or Flying Lotus or Neil Young.

Circles was “the product of a long winter’s isolation in the Rocky Mountains” – but it was recorded in many different locations – do you think immersing yourself in different locations and vibes is necessary to get a distinctive sound? Is your music found through osmosis?

I think environment is important and has a real impact but it’s not necessary. A lot of the vibe of that record came from writing the songs in the mountains. That was just an extreme place to write, so had a palpable effect. I like isolation. I imagine being holed up on the Irish coast would be really nice for writing.

What new were you looking to do with this year’s Shadow Of The Sun? What was the process?

We’ve been fine-tuning our process over the last few records, but it hasn’t changed too much. I take time off to write, make some demos, then we start recording at home. We’ve gotten much better at that. Then we go into a studio for a bit, usually with Phil Manley in SF, then we mix with our friend Jonas in Berlin. We really like working at home, on our own time. We just don’t have all of the gear and expertise to do everything in the basement.

When do you know that a project is done, finished, you can throw down the pen or hit stop?

We really struggle with the mixing process, which is why we usually end up in Berlin doing a second round of mixing. It’s the point at which you have to face what it is you’ve actually created. Before that it’s still vague, just sounds and ideas. Writing is easier. I just write more songs than we need and some just don’t make the cut.

What are you working on at the moment if anything; Where do you see Moon Duo’s sound going?

We’re just touring right now. I’ll get back to writing at home this summer. I don’t know what direction we’ll go in next. I feel like there are endless possibilities, which is a great feeling to have.

Tickets for Moon Duo in the regional Cultural Centre in Letterkenny are on sale now for €10 from here.
Thanks for reading, and, again the usual, if you liked it, please like it, share it or even subscribe! Drop a comment if you feel that way compelled.